Definitely one of the more surreal moments of the strike was marching with a sign outside the Melrose Gate, through which I'd driven for the first decade of my career. The sidewalk was so crowded and jammed with writers, actors, fans, and press yesterday that the biggest problem faced by many of us was finding a place to stand when the light turned red and we were expected to politely get back on the curb and let traffic go through the gate. A Trek-themed blues band, fronted by longtime Trek actor Vaughn Armstrong provided music and there were fans scattered here and there in TOS (that's The Original Series for those non-Trekkers among you) uniforms.

But the thing that stuck with me the most was encountering random clutches of writers from my days in the 23rd and 24th centuries in this context. We were all older and grayer, to be sure, except for Ira Behr (above) who is bluer. But there was this common bond we all shared, this underlying sense of we're all in the same club that I hadn't really expected, perhaps because I hadn't thought about it that much. I knew I'd be seeing friends and colleagues from days gone by, but I didn't expect the sort of strong, immediate chord of recognition between us all and a sense that we were bound together by something that was both far in the past and yet still vital and alive there standing in the perpetual Hollywood sun. In between exchanging email addresses and catching up in small bursts of talk of family and friends, I found myself wishing that there were semi-regular gatherings -- reunions, really -- for those of us who worked on The Franchise.

We were family once, and it's a shame that the kin never get together anymore.

Here's what I said:

Hello, I'm Ronald D. Moore, Writer and Executive Producer of Battlestar Galactica, and member of the WGA since 1989 -- and I'd like to welcome you to Pencil Day here at Johnny Carson park.

What you see behind me is the culmination of a grassroots effort on the part of thousands of television fans across the United States and in some cases, from overseas. A group of fans, led by Brenda Lawhorn, Chris Bridgesm, and Adam Levemore-Rich, but including many others, were looking for ways in which they could support the WGA during the strike. They put together a website: Fans4writers.com, where fans could come together and talk with each other as well as with the writers from their favorite shows, and these fans came up with what became the Pencils Campaign.

Some of you might remember the famous "nuts" campaign on behalf of "Jericho" where fans send packages of nuts to CBS to save the show from cancellation or the "Tabasco" campaign conducted to save "Roswell." Well, these fans came up with the idea to send pencils to the moguls heading the major studios and networks represented at the bargaining table. Fans were able to buy boxes of pencils in the name of their favorite show for $1, which would then be delivered to each of the six major companies today.

The pencils will be delivered to:


In less than three weeks, the fans bought over a half a million pencils, which you see here today.

Simply put, the message they're trying to send by this effort is that members of the audience itself - the market for our shows and films – both understand and sympathize with the position of the Guild and want a return to collective bargaining. Lest this be dismissed as a small group of fans, it's worth remembering that recent national surveys have shown solid majority support for the writers in this labor dispute.

The WGA is still at the table, waiting for the studios to return to good faith negotiations. While we believe our proposals to be fair and reasonable, the Guild has always been willing to engage in legitimate bargaining on each point of the contract.

But we need a partner to negotiate with.

Issuing ultimatums, staging walk-outs and releasing factually-challenged press statements tinged with manufactured outrage does little to resolve this dispute. There is no reason why the studios cannot return to the bargaining table, sit down, and work out a fair and equitable settlement for everyone involved, and we hope that this symbolic action on the part of the fans will serve to remind the studios and networks that their audience is indeed watching and listening, and they know the difference between posturing and bargaining.

--------------------------
With our first wave of Battlestar Galactica action figures hitting stores next week we thought you might enjoy a peek at the concept art that lead to their creation. So check out these Apollo and Six drawings to hold you over. 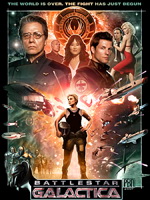