I have a very simple question that has been confusing me for a while now, and I'm probably just overlooking a very obvious detail.

In LDYB (part 2, I think), when Adama confronts Roslin about fixing the vote, he tells her she won't end up doing it, because the cancer would move to her heart and she'd die inside. Now I was under the impression that she was totally cured of her cancer, and went into an immediate remission once the Cylon blood transfusion had been completed. Am I reading too much into this or just totally missing something? :P 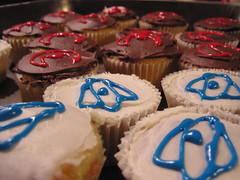 “Lieutenant, set condition one across the ship. Launch all Vanilla Vipers. And someone get me a glass of milk, and some napkins with the corners cut off!”

This is what happens when you hand the keys to the kitchen to a true geek. I want someone to make these for MY birthday, dammit!

Haven't seen this posted yet but The Academy of Science Fiction, Fantasy & Horror films has announced the nominations for the 33rd Annual Saturn Awards and BSG has been nominated for the following:

The winners will be announced at this year’s 33rd Annual Saturn Awards which takes place on Thursday, May 10, 2007 (Source)

It looks like the official site has a new video blog up.

Please don't post any reaction to it here in this thread -- I'm not gonna watch it, it looks like it may contain some spoilers, and I'm officially trying to stay spoiler-free now. :)

Has anyone other than me noticed how poorly Sharon's uniform is tailored? Specifically the sleeves - they're too long and too big for her arms. It looks like she got someone's cast off jacket. I mean, everyone else's uniforms fit them so well, and obviously, considering 'Fat Apollo', they're not reduced to actually using other people's cast off uniforms. So why is Sharon's jacket so ill-fitting?
Collapse