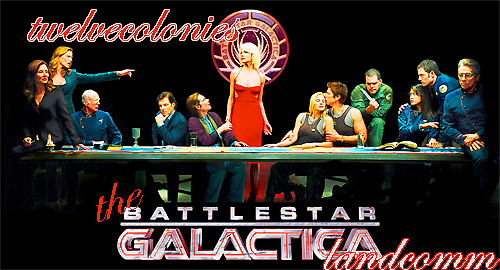 The round just started this month! Apply HERE and tell them that I sent you. :)

Battlestar Galactica: Scattered
an RPG set after the events of the miniseries

Commander Adama, in order to restore some sense of hope in a hopeless situation, told the fleet that he knows where Earth is, so the search has begun. But the only person that knows he lied is Laura Roslin.

They're now on the run from the Cylons as they search for Earth, but more and more clues as to its potential location will be revealed... Adama may not know where Earth is, but prophecies point to the planet existing...

Helo exchanged his place on Boomer's ship to save Gaius Baltar. He is currently attempting to escape Cylons and Centurions while also trying to heal his wounded leg on Caprica. Who will come to his aid?

With learning that Cylons now look like humans and that they are living among the fleet, Gaius Baltar is developing a Cylon detector so the entire crew can be tested.

The only known Cylons right now are Number Two Leoben, Number Five Aaron, and Number Six. Little does the fleet know that one of their own pilots is a Cylon in hiding, but even she doesn't know....

ALL OTHER CHARACTERS AVAILABLE! Request yours today!

There are 3 BSG fics at

werewolfbigbang that need an artist.
Check them out HERE!

We are very pleased to present a new page of behind the scenes photos at http://www.battlestarlocations.com/!

Maurice Woodworth, set dresser/on-set dresser for BSG, shared his amazing photography with us. Included are never before seen photos from the 1000s of images that Maurice took over the course of the series.

The page is a work in progress, so keep an eye on it for more exclusive photos!

You can check it out here (Click on the name or picture of Maurice to see the new page!):

Grant's kindly agreed to let me post this here.

Galacticon this year will be in Houston, at the end of May. Among all the other events, there will be a panel on fanfiction and a workshop on writing.

As a part of that, Galacticon is running a fiction competition.  You DON'T have to attend the convention to enter, and we would love to see loads
of good entries in all genres, so why not mosey along over to the website and take a look? Spread the word to any and all BSG fans, both original series and re-imagined, and encourage everyone to have a go. It'll be fun. There will be prizes.

SPREAD THE WORD!  But hurry - the deadline is approaching!

The Flixies are out and Mary wants you to vote for BSG! She said so, on twitter.

Here is photographer Dennys Ilic's behind-the-scenes video of his photo shoot with Katee and Tricia.
Your heart will melt over how adorable these two are together.

You can purchase the calendar and prints at RedBubble
http://www.redbubble.com/people/actingoutlaws/

And there are autographed prints at the Acting Outlaws website.
http://actingoutlaws.org/site/?page_id=183
Collapse